a. From switched molecular self assembly in solution to radical conductors in solid state and active switches or rectifiers in electronic devices

The use of D-A molecules is interesting for its use as building block for active rectifiers in electronic devices. At the same time D-A dyads can lead to bistability (neutral and the zwitterionic states) upon application of an external stimulus (temperature, pressure, electric field, etc) through an Intramolecular Electron Transfer (IET) process opening the way to molecular switches and memories. We study the bistability phenomena in a family of neutral polychlorotriphenylmethyl radical acceptors connected to different donor units (ferrocenes or tetrathiafulvalenes, TTFs) with magnetic, electric and optical properties that can be switched between the two different states. These phenomena take place in solution and in solid state revealing the role of the cooperative intermolecular electrostatic interactions responsible for the bistability.

A supramolecular reversible switch based on TTF-PTM radical dyad (1) that exhibits changes in its optical, magnetic, and electronic properties when using the temperature as external input

Organic donor-acceptor (D-A) systems formed by the electron-donor tetrathiafulvalene (TTF) linked to the electron-acceptor polychlorotriphenylmethyl (PTM) radical through different π-conjugated bridges exhibit interesting physical properties such as bistability in solution or conductivity in solid state. Understanding the interplay between intra- and intermolecular charge transfer processes in solution is of high interest in order to rationalize the self-assembling ability and conducting properties of such dyads in solid state. Interestingly, when using a TTF derivative the IET induced a spontaneous self-assembly of the TTF units which can form intrinsically conducting stacks. In these systems, the interplay between magnetic and conducting properties will be crucial for developing molecule-based spintronic devices.

Our interests are also focused on grafting D-A open shell dyads on conducting surfaces to study how it is possible to tune the rectification ratio by changing the electronic nature (open-shell and closed-shell) in D-A self-assembled monolayers. 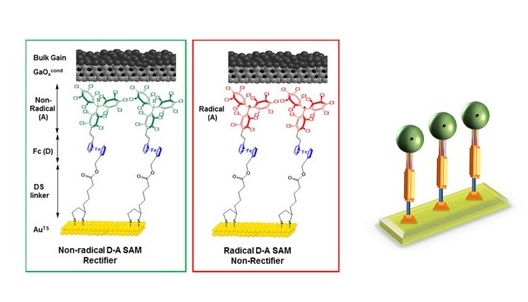 b. Organic Radical Nanoparticles for Molecular Optoelectronics and biological applications:

We are interested in the luminescent properties of materials based on open-shell molecular systems. In particular, we work with polymeric films and organic nanoparticles (ONPs) doped with triphenylmethyl radical molecules. Its luminescence lifetime and the luminescence quantum yield (LQY) are highly increased and the formation of excimers from stable and persistent supramolecular radical-pairs has been observed for the first time. The good stability and luminescence properties with emission in the red-NIR region (650–800 nm), together with the open-shell nature of the emitter, make these free-radical excimer-forming materials promising candidates for optoelectronic and bioimaging applications. 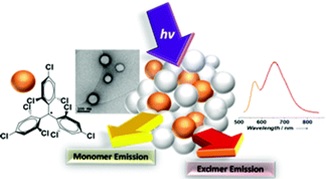 We are also studying the enhancement of the non linear optical properties (NLO) of D-A molecular systems when the PTM is in its radical form as well as with the length of the bridge between D and A.